It has been a while since the Catholic Church in Eswatini received the gift of a new priest. It is always a jubilant and extraordinary celebration when this happens. On Saturday, 8th June 2019, it was not different. His Lordship, Bishop Jose Luis Gerardo Ponce de Leon IMC ordained Dabulamanzi Ntshangase to the priesthood at the Cathedral in Manzini. Hundreds of people from all over the diocese and neighbouring country South Africa came to witness this celebration.

Even before 10am, the Cathedral was already packed to the rafters. Throngs of people were already inside when the Bishop, the clergy, seminarians and altar servers made their procession inside while the Choir rendered entrance hymns. The candidate’s (Dabulamanzi) parents, other family members and friends were among those present.

After the readings (Numbers 11, Peter 5: 1-5) which were chosen by the soon to be priest were read, the election of the candidate to priesthood began. When his name was called, he responded with a bold and confident ’’ngikhona’’ meaning “here I am”. The congregants screamed in jubilance. As he majestically made his way towards the sanctuary, the song “Here I Am Lord” was playing. After taking his seat, the Bishop gave his homily.

In his homily, the bishop mentioned a story he once shared with the bishops in the plenary of the Southern African Bishops’ Conference. During his childhood, he said, he used to watch a series called: “the lone ranger”. It was a masked ranger, riding a white horse, who fought against injustices in the American Old West. With reference to the series, the bishop wondered if we could say that priests are called to be “lone rangers” too because of the way they live. He mentioned that many times they live alone and even when a bishop appoints more than one priest to a parish, it might happen they live as if they were alone. Noteworthy, he pointed out that the readings were not chosen by him but by the candidate. Asking him why he chose these readings he said: “One gets to understand that for better results one needs to share responsibilities and communication is the key to effective ministry.” The Bishop mentioned that their call as priests, his call as a bishop is a personal one but it is to be fulfilled in a community and with a community. It must include not only priests and deacons but religious sisters, diocesan pastoral councils, parish councils and many others.

He encouraged the soon to be priest (addressing him Fr Ntshangase much to the excitement of those present) to continue working with the priests of the Cathedral where he will remain, with the religious and laity. To also work with him as the bishop with the same spirit as he has been doing and that he be in the diocese a source of unity amongst priests. Thereafter, the candidate Dabulamanzi Ntshangase was examined and then pledged before the bishop his promise of obedience. He then lay prostrate on the floor while the choir led the congregants in singing the Litany of Saints, calling out to the communion of saints to pray for him. After that, the bishop laid his hands on his head, conferring the Holy Spirit upon him. Priests then took turns laying their hands as well praying for him. His investiture was done by Fr. Wiseman Nkomo. Fr. Dabulamanzi Ntshangase then knelt in front of the bishop who anointed him with oil. The bishop then hugged him, holding and raising his hand shouting “nangu umpristi wenu omusha sha!’’ (here is your brand new priest). Everyone stood up, screaming with joy, dancing and singing along with the choir in an appreciative and jubilant manner. His father could not hide his excitement as he danced while his mother was seen shedding tears of joy.

Moreover, the priests hugged him and welcomed him to the priesthood. A smile worth 7 and half years was seen in Fr. Dabulamanzi’s face as he smiled throughout. After all the excitement, he took his sit next to the bishop as Mass continued. A special moment took place before the final blessing when the bishop asked the new priest to bless him, which he did much to the appreciation of the congregants. Giving the bishop his first blessing as a new priest was a special moment indeed. After mass lunch was served at the Catholic Centre and thereafter gifts were presented to the new priests by different sodalities and others as well. 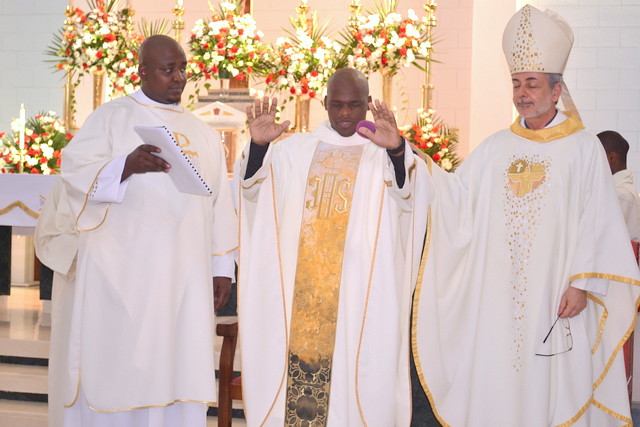